Safety clearances are getting more important when it comes to designing machines. The increasing degree of automation, as well as the goal of manufactures to design machines more compact, highers up new potential hazards - in short: people are subject to a higher density of hazards and at the same time, closer distances to protective devices like covers, protective fences etc. are appearing.

In order to enable machine designers to create guardings, which protects people from mechanical hazards in commercial as well as in public enviroments, two standards offer a well-founded foundation:

Important dates for the application of these standards

Finding correct requirement profiles, calculating and applying safety distances in relation to people of different heights and different ages are particularly important in the design phase of machines. Through the continuous addition, merging and internationalization of these segment standards, the selection of limit values ​​or similar, getting more and more simplified for designers. Maintaining an overview of which standards are up to date at which point in time or which one triggers presumption of conformity for the relevant EU directives can be a bit of a hassle for designers….

Figure 1 shows the date history and the merging of the standards, including the specification of which standards are currently listed in the Official Journal (OJ) of the EU and therefore trigger presumption of conformity in relation to the Machinery Directive 2006/42/EC.

ATTENTION: EN ISO 13857:2019 and EN ISO 13854:2019 are not yet subject to the presumption of conformity based on the Machinery Directive 2006/42/EC. The corresponding implementation decision with details of the transition periods of the EU Commission is pending. Stay up2date – follow us on LinkedIn to get the latest informations!

It replaces the previously used EN ISO 13857:2008, which is currently still harmonised to the MD 2006/42/EC and thus it triggers the presumption of conformity.

Scope of the standard:
“This document specifies values for safety distances against reaching of mechanical hazardous areas; for commercial and public areas. The safety clearances are suitable for protective constructions. It also contains information about distances that prevents free access through lower limbs." – Quote (freely translated) EN ISO 13857:2019

Datas shown in this standard relates to following age / application groups of people:

Following points are not considered in this standard:

In general, it can be said that the standard was mainly revised editorially - changes to the important data such as dimensions for safety distances, access or intervention sizes have not changed.

The following essential topic was added as a separate main point (4.4) in the standard:

This is only an extract from point 4.4; the core information mentioned above was already noted in the respective tables of the old edition EN ISO 13857: 2008 - with the addition of this point, only a new clarification was added to ensure better clarity.

It replaces the previously used EN 349:1993+A1:2008, which is currently still harmonised to the MD 2006/42/EC and thus it triggers the presumption of conformity.

Scope of the standard:
"This document enables the user (e.g. standard setters, machine designers) to avoid hazards at crushing points. It specifies minimum distances depending on parts of the human body and is applicable if an appropriate level of safety can be achieved through this procedure. This document is just applicable to the risks of crushing hazards and is not applicable to other possible hazards, e.g. B. Pushing, shearing, pulling in. "- Quote (freely translated) EN ISO 13854:2019

Simple standards search tool, automated up2date monitoring of projects and quick access to original documents. With these and other key-features, Safexpert StandardsManager supports you by engineering safe products in machinery-, plant- and electrical device constructions.

Find out now, which advantages Safexpert Normmanager could offer you.
For more informations look our video on following Link! 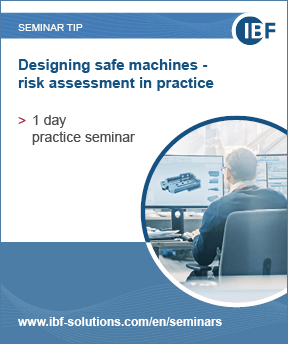